At La Paz Language Academy, we recognize that learning to communicate in a new language is about more than just learning grammar and vocabulary — it’s about learning and understanding the culture in which the language came to be spoken. At La Paz, our experienced educators employ innovative, culturally immersive teaching methods that help our students learn how to not only communicate in a new language, but better understand the background of the people they’re communicating with. It’s a deeper approach that we’ve found has led our students to become more confident communicators and better independent learners.Sign up for one of our 20+ online language classes today and discover the benefits for yourself!

La Paz Language Academy is one of the most diverse online language schools in the nation. On a year-round basis, La Paz provides online language classes for all proficiency levels in: La Paz also provides additional foreign language programs for other critical languages. Contact us today for more information about our ESL classes, immersive cultural teachings, and more! 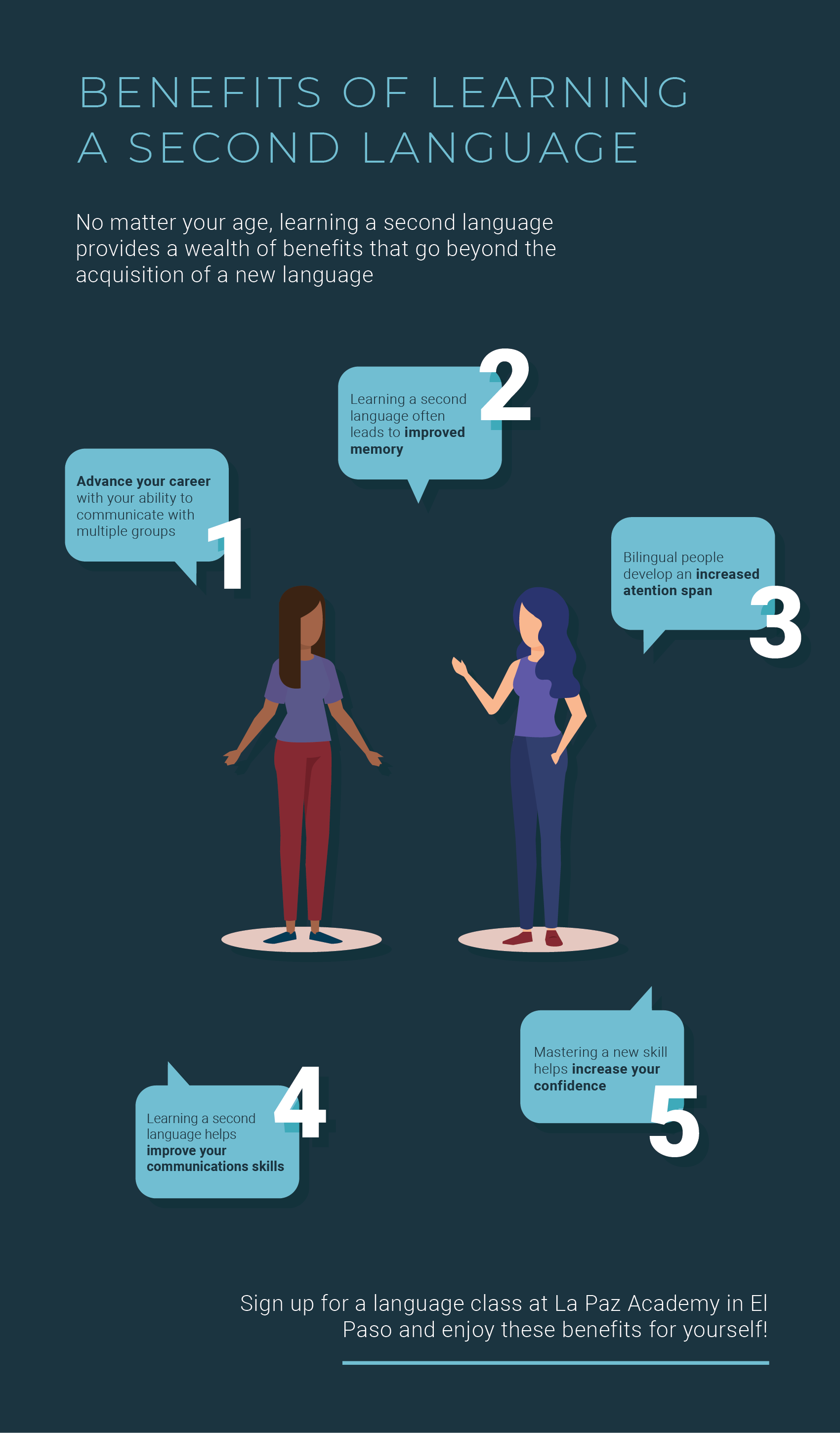 At La Paz Language Academy, we use the best language learning programs and teaching strategies to help students of all ages and levels become independent learners as they confidently communicate in the target language. All of our language curricula are based on the levels established by the “Common European Framework," and our textbooks follow the same frame of reference.

A typical foreign language instructor at La Paz Language Academy is a native speaker with years of teaching experience in the U.S. and abroad. Due to the quality of our programs, we tend to attract highly motivated students to our language classes. Our guiding principle is characterized by an emphasis on communication while simultaneously promoting independent language learning and leading the students to become self-reliant in ways that can be transferred to different domains.

The Academy’s nearly one decade of successful language instruction programs relies on highly experienced instructors, continuous education teacher training courses, and the use of methods such as The Communicative Approach, which emphasizes communication through interaction that is engaging and meaningful to students. The Total Physical Response and the Audio-lingual Method are other techniques used in our language courses. Communicative Language Teaching and other approaches do not minimize the other skills such as reading and writing. Rather, they enhance these skills through a well-rounded curricula that utilizes the five senses, cultural immersion, and more.

It is this comprehensive teaching that sets us apart from other online language schools. Our methodology and language programs attract students from all walks of life to choose La Paz Language Academy when they have a significant need or desire to communicate in another language.

If you’re ready to give your child a leg up in tomorrow’s economy or give yourself the tools you need to travel abroad confidently or engage in business with international clients, contact our online language school today. We offer private, group, and online instruction in more than 20 languages, and our teaching methods are the most effective at quickly developing you into a confident communicator in the language of your choice. With fun, interactive coursework based around meaningful, immersive cultural content, you’re sure to find our online language classes as engaging as they are effective at helping you acquire new language. Learning a new language should be an enjoyable, intentional journey, not a chore, and that’s the learning environment we create at La Paz Academy. Call us today to get started learning a new language!

There’s a common misconception in science that adults aren’t nearly as good as children at learning new languages. It’s a myth that's been propagated through Western culture for years. While it is true that there is more evidence of children learning second languages successfully than of adults, that doesn’t mean adults are any less adept. In fact, new research has shown that people who begin studying new languages after the age of 20 can still definitely achieve a native speaker’s level of skill with practice and study.

Adults learn language similarly to children, however, due to the demands of work, family, and other life obligations, older learners often don’t have nearly the same amount of time to interact with speakers of their chosen language or study in a classroom setting as children do.

Just like children, adults learn language best through interaction — however, due to the aforementioned time constraints of adult life, older learners must learn more through deliberate study and intentional interactions, as opposed to the many different kinds of casual social interactions children have as they learn languages growing up.

How Our Teaching Supports Adults’ Acquisition Of Language

We support the deliberate, intentional way adults learn language through what we call our “Communicative Language Teaching Approach”. This approach is somewhat related to the interaction-heavy Natural Language Learning Approach we use with younger students, but with an emphasis on the target language and real-world applications to add relatable meaning to enhance and motivate learning.

This approach builds off the interactive way we teach our younger students language, but instead of building off cultural elements of the language, lessons are geared towards real-life situations and the needs of our adult students. We understand that many adults that come to our online language school for instruction are doing so for specific reasons, and whether they’re studying a new language for business, to live abroad, or any other purpose, we gear our instruction toward helping them communicate in setting(s) they find most meaningful. On any given day, our adult students might role play interviews in their chosen language, do group work or play games, or hold discussion and conversation on high-interest topics in their chosen language. Through these kinds of activities, our adult students are presented and taught their chosen language in the contexts in which they most expect or desire to use it.

According to the Linguistic Society Of America, young children acquire language easily and naturally, without much effort, and even without formal teaching, in some cases. Language acquisition happens automatically for young children as they are exposed to it.

While parents and caretakers aren’t their children’s primary source of language education, they play a vital role in children’s language interaction simply by talking to them. Children who are rarely spoken to, or who are only exposed to language through television and media, will not learn to speak.

This is because children acquire language chiefly through interaction — with their parents and relatives, with other adults, and with other children. All healthy children who grow up in households in which they are surrounded by conversation will acquire the language or languages that are being used around them. The number of languages is, perhaps surprisingly, not a factor — children can easily pick up two or more languages at the same time as they grow, so long as they are regularly interacting with people who speak each given language. This is why families living in particularly diverse communities, such as New York City, will sometimes notice the phenomenon of their children using three or more languages to play with a multiracial group of playmates.

“Baby talk” has also been shown to help kids pick up language. Research has indicated that the so-called baby talk that adults use with infants and toddlers tends to always be slightly ahead of the level of the child’s language development, as if it were helping pull the child’s understanding of language along. Across most cultures, baby talk has been shown to share common traits: simpler vocabulary and structure than adult language, exaggerated sounds, and a lot of repetition and use of questions. These factors all seek to help children figure out the meanings, sounds and sentence structures of the given language.

Linguists and educators like ourselves are still studying to try to figure out how exactly it is that infants and toddlers are able to pick up knowledge as complicated as language, but the common trends are crystal-clear. Whether through genetics or some innate ability, children pick up language(s) naturally through interaction with people of all ages, aided in some part by ‘baby talk,’ which helps them decipher the sounds, meaning and sentence patterns of language.

How Our Teaching Supports Children’s Acquisition Of Language

We support the intrinsic way children learn language by employing what we call a “Natural Language Learning Approach” with the kid-aged and adolescent students at our language school. We designed this approach to mimic the way young kids learn their native tongues — through more interactive means rather than explicit instruction.

We achieve this natural learning approach through the use of a highly diverse course curriculum designed to stay fresh and stimulating for our students. On any given day, our students might observe conversations in their language of practice and be asked to role play the situation on their own afterward, they may learn to sing a new song, be instructed on how to do a dance from the culture their language of study is from, or even act in a play written in their language of study. Through these kinds of arts and activities that explore the culture behind the language of study, we continuously expose our students to new elements of their chosen language and force their brains to work in real-time to understand the communicative nuances of their chosen language, much like a child would playing with kids that speak other languages.

We’re sure to cover the basics in our approach, too, but again, much of it is focused on learning through interaction. We introduce some grammar rules and tables to help our students learn the basics, however our classes follow the same pattern as real-life learning — most of the language retention will come through interaction and engagement with stimulating activities related to the culture in which the language of study is from.

Above all else, we strive to foster a positive language learning environment in our classrooms, so students remain encouraged and and energized in learning their chosen language. Whether the learning activity is an online interaction or an in-person scene study, we know students acquire and retain new language best when they feel stimulated and motivated to do so! And so that’s what we strive to maintain.